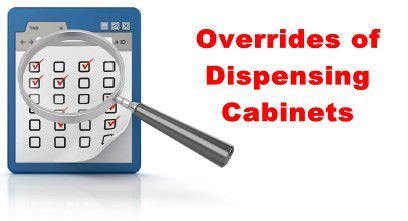 The override assessment process officially became a
performance element in the Joint Commission’s medication
management standard starting on January 1 of
this year.

“There are so many things that can go wrong in an
override situation,”

Nurses’ lack of familiarity with medication
names can lead them to select incorrect products from
the alphabetical list displayed on the ADCs.

Original article as below :

Hospitals that are visited by surveyors from the Joint Commission need to demonstrate the existence of and adherence to policies for reviewing overrides for med-ications kept in automated dispensing cabinets (ADCs).

The override assessment process officially became a performance element in the Joint Commission’s medication management standard starting on January 1 of this year.

Robert Campbell, pharmacist in the Joint Com-mission’s Standards Interpretation Department, said surveyors will pay special attention to overrides when ADCs aren’t operating in “profile” mode—that is, when the device permits staff to remove products before a pharmacist has reviewed and verified orders for those medications.

“We’re trying to make sure that our standards are rel-evant in matching the current landscape in [pharmacy] practice,” Campbell said.

“One of the big problems with automated dispensing cabinets is that sometimes staff are overriding without having an order,” she said. “There’s no verbal order writ-ten down, or they’re anticipating an order, so they get a drug from the cabinet.”

ISMP in late February identified ADC overrides for respiratory therapy medications as a contributing factor in medication mix-ups. Paparella said the problems include instances when staff pulled the wrong product, dose, or strength, sometimes for the wrong patient.
She said it’s good that the Joint Commission is examin-ing override reviews as part of the survey process.

“The expectation would be that any surveyable site under the hospital survey would be subject to these standards and requirements,” he said.

Campbell said overrides sometimes occur le-gitimately when there is an urgent need to obtain a medication dose. But he said surveyors may consider whether overrides result from a perception that the pharmacy isn’t processing orders efficiently or that an override is necessary to obtain the required strength of a medication.

The Joint Commission leaves it to individual hospi-tals to determine the specifics of their override policy.

“All we expect is that you develop a time frame. And whatever you develop in your policy, you stick to that,” he said. “We did not get prescriptive in the requirement as to how it has to be documented. We just need to see evidence that it was done and then, secondly, what are they doing with that data once they’ve collected and analyzed it.”

“When an automated dispensing cabinet is used to dispense a medication that has not already been verified by a pharmacist, it generates an order in our electronic health record” system, he said. “If the order looks fine, completely, they will verify it.”

The override assessment process officially became a performance element in the Joint Commission’s medication management standard starting on January 1 of this year.

“There are so many things that can go wrong in an
override situation,”

If the pharmacist has any concerns, he said, he or she will call or visit the person who initiated the override to resolve the issue. The formal override process includes a monthly re-view that tracks the override rate in different patient care areas and identifies trends that could signal problems.

Bangalore said about 11,000 total doses are dispensed from the hospital’s ADCs each month, and there are about 750 overrides per month.

“If a Joint Commission surveyor would come aboard, . . . I’d show them the summary data,” he said. “I do have data on the individual overrides. And, so, if the surveyor wanted to individually review those, we would be able to go into the electronic health record and look that up.”

Bangalore said he’s used the summary data to reduce overrides for phytonadione injection and erythromycin ointment in the hospital’s labor and delivery unit.

The problem, he said, was that local pediatricians have limited time onsite and often don’t visit newborns until several hours after birth. So the hospital developed a medical staff–approved protocol that allows nurses in the unit to enter orders for the medications before pediatricians arrive.

He said the reviews have also driven positive changes in the way ADCs are used in the hospital’s wound care clinic and postanesthesia care unit.

Leonard Darling, staff pharmacist at 60-bed Three Rivers Health in Michigan, said that although his facility is accredited by the Healthcare Facilities Accreditation Program, not the Joint Commission, the latter organiza-tion’s standards still matter.

“Eventually you still have to meet the same criteria with whoever you’re accredited by,” he said.

Darling estimated that the hospital averages about 40 overrides per day, largely for pain medications at the outpatient surgery unit.

“Our goal is to eliminate any overrides while we’re present, because there’s really no excuse for it,” he said.

Darling said the pharmacy staff manually reviews a daily printout of overrides each day as time permits to match overrides to medication orders and ensure that the correct product and dosage were removed.

“We’ve done things in the past like looking at it on a monthly basis and a quarterly basis . . . and it gets to be overwhelming, because there’s so much data,” he said.

She said that’s because the Centers for Medicare and Medicaid Services (CMS), which reviews the hospital’s adherence to Medicare’s conditions of participation, also pays attention to Joint Commission requirements.

“While it may not be a written standard in CMS [regulations], they’re still going to look at the overall concept,” she said. “And the overrides are something that CMS looks at.”

Hogrefe said the hospital lacks an electronic health records system, but the pharmacy management software communicates directly with the facility’s ADCs. She said that allows pharmacists to monitor and respond to over-rides in real time when the pharmacy is open.

“There are so many things that can go wrong in an override situation,” Hogrefe said. “I’ve been able to stop some actual med errors because of going out [to the ADC site] when I saw the overrides.”

She said nurses’ lack of familiarity with medication names can lead them to select incorrect products from the alphabetical list displayed on the ADCs; that, she said, can result in problems such as a nurse selecting metoprolol succinate (an extended-release product) instead of metoprolol tartrate.

Hogrefe recalled an override error involving a dialysis medication that made a large impression on her. She had entered the order into the pharmacy system in the morn-ing, but when a nurse discovered that evening that the order hadn’t been released, Hogrefe initiated an override.

She discovered, after the drug was given to the patient, that the medication order had been discontinued earlier that day.

“I actually tell the nurses that story because . . . anybody can make a mistake if you’re relying on your memory. You have to look at the orders,” Hogrefe said.She said a nephrologist determined that the extra dose wasn’t likely to harm the patient.