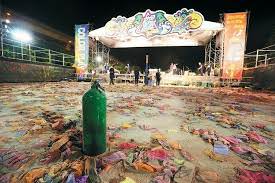 On 27 June 2015, flammable starch-based powder exploded at an amusement park in New Taipei City. Theexplosion, which occurred during a “Color Play Asia” party, has been called the “worst incident of mass injury” in New Taipei City.More than 500 people were injured causing the Ministry of Health and Welfare to activate its emergency response mechanism.  Most of the injured were university students in their twenties and late teens who had just started their summer vacation.

According to ministry data, a total of 498 people injured during the accident were rushed to 43 different hospitals for emergency treatment.According to the ministry’s victim monitoring statistics, the 498 victims suffered an average burn size of 43.7 percent to their bodies, with 234 sustaining burns to more than 40 percent of their bodies, while 24 suffered burns to more than 80 percent of their bodies. As of today the fire has claimed three lives while 434 of the victims remain hospitalized, 237 in critical condition.A number of them have been isolated in special units specifically to prevent infections from burns.

When the explosion occurred, many medical professionals including pharmacistsresponded quickly to the emergency. Community and hospitalpharmacists were called into action to triage the need for large volumes of crucial silver sulfadiazine used to prevent and treat wound infections in patients with second- and third-degree burns. Due to the number and severity of burns, there was an immediate shortage of the cream across all hospitals in Taipei. The shortage of silver sulfadiazine was quickly met by coordinating with wholesale distributors and obtaining supplies from hospitals and community pharmacies from the south of Taiwan. ICU pharmacists are now concentrating efforts on preventing infection for burn victims.  The activation of the Ministry of Health and Welfare’semergency medical case management system allowshospitals to report information and conditions of patients they have treated.

Disasters are unpredictable and therefore are difficult to prepare for. During a disaster, pharmacy departments are responsible for handling medication procurement and storage. In the aftermath of such a disaster, emergency preparedness planning or disaster planning shouldbecome a focus area for pharmacy departments. Thisevent has highlighted the importance of effective emergency preparedness by hospitals and the communities they serve.